by CHICKS ON SPEED 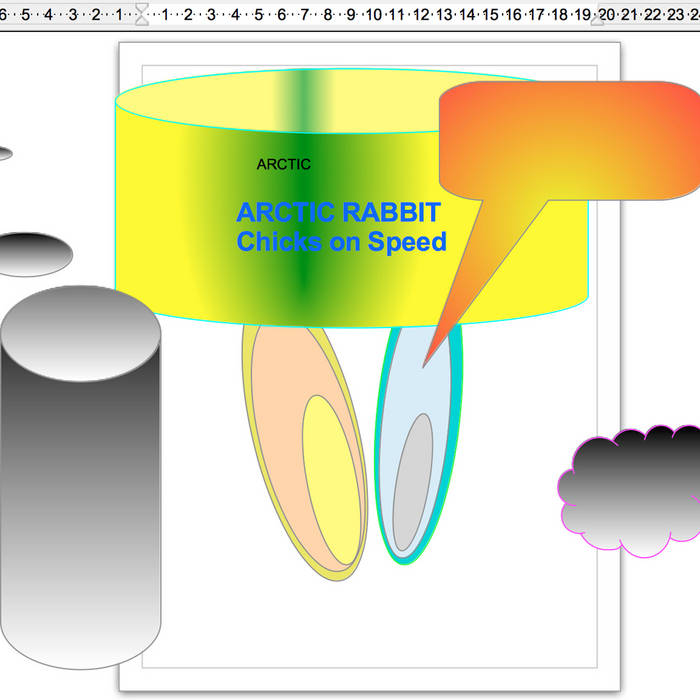 
Alex
One Click makes you larger and one click makes you small
Hysterias silent, it’s at the same time, it mimes between doors,
Masculine language, lies and deceives and women are finding their way,
It’s too long, the non-identical, and she statements are finding the way,
distinguishing feature…..we touch upon,
Her bodies sex organ…….what’s her speech?
When we’re in an ultra-connected and neo-liberal world,
Technology can’t help us, it’s lost for words, it’s gone, the grammar and the syntax,
No longer constituted verbs, eventually, out of the frame…..

The Oceans, I am the ocean and the ocean is me….
The deep blue molecular symmetry, phenomena emerge,
Its unmeasurable, the waves, patterns of flow,
It’s a process in practice,
Water improvisation, its unstable, gravitational,
Unreversable, earth, earth, molecular interactions,
Transformations of the earth, naturally engineered life patterns,
Its out of control, out of control,
Multi-species working together, staying with the trouble

Went to school to learn to rule
Teachers were missing, were all on tour
A fish in the lab,
A mouse on the slab
Kitten in my bed
The Base, is shaking the city
As AI composer is talking out loud
is talking out loud,
Fill the lean mind
snakes that unwind
drain off the noodles
visual signs
can you see
don't you know
can you know without a tool
kiss without weapons
love without drive
drive without wheels
care with no heart
Beat without race
Run with no track

Alex
It’s come to take over, we’re not doing things with our
hands anymore, because the hands have colonised the feet,
they’ve colonised the body, we’re here to decononise the feet

As the world turns
The mammals shape shift, so can you
release while recording
Your walking while your dreaming, your dreaming cause your flying
you sifdddöüäässsAAä
let’s crossover, personal mode
LALA
ALEX LALALA

Melissa
overlapping, overlapping into each other
we are the clan the gang, facing alone level personal mode as the world turns mammals shape shift, so, so

MELISSA
Can you, circle around the idea of flight
I made a hit, and got a dime
went to school, to learn to rule
teacher were missing were all on tour
fish in the lab, mouse on the slab,
kitten in my bed, as the base is shaking the city

ALEX and the ocean is me-


MELISSA: Trash without the garbage-

Chicks on Speed are art duo Melissa Logan and Alex Murray-Leslie who met in Munich, Germany while studying at The Academy of Fine Art, Munich. The duo cross lines and build new groups and are direct decedents of bauhaus, Fluxus, SI and created Electroclash in the last milenia. When they take a break they sleep in a lab and record their dreams which are sonified into the endless songs. ... more

Bandcamp Daily  your guide to the world of Bandcamp